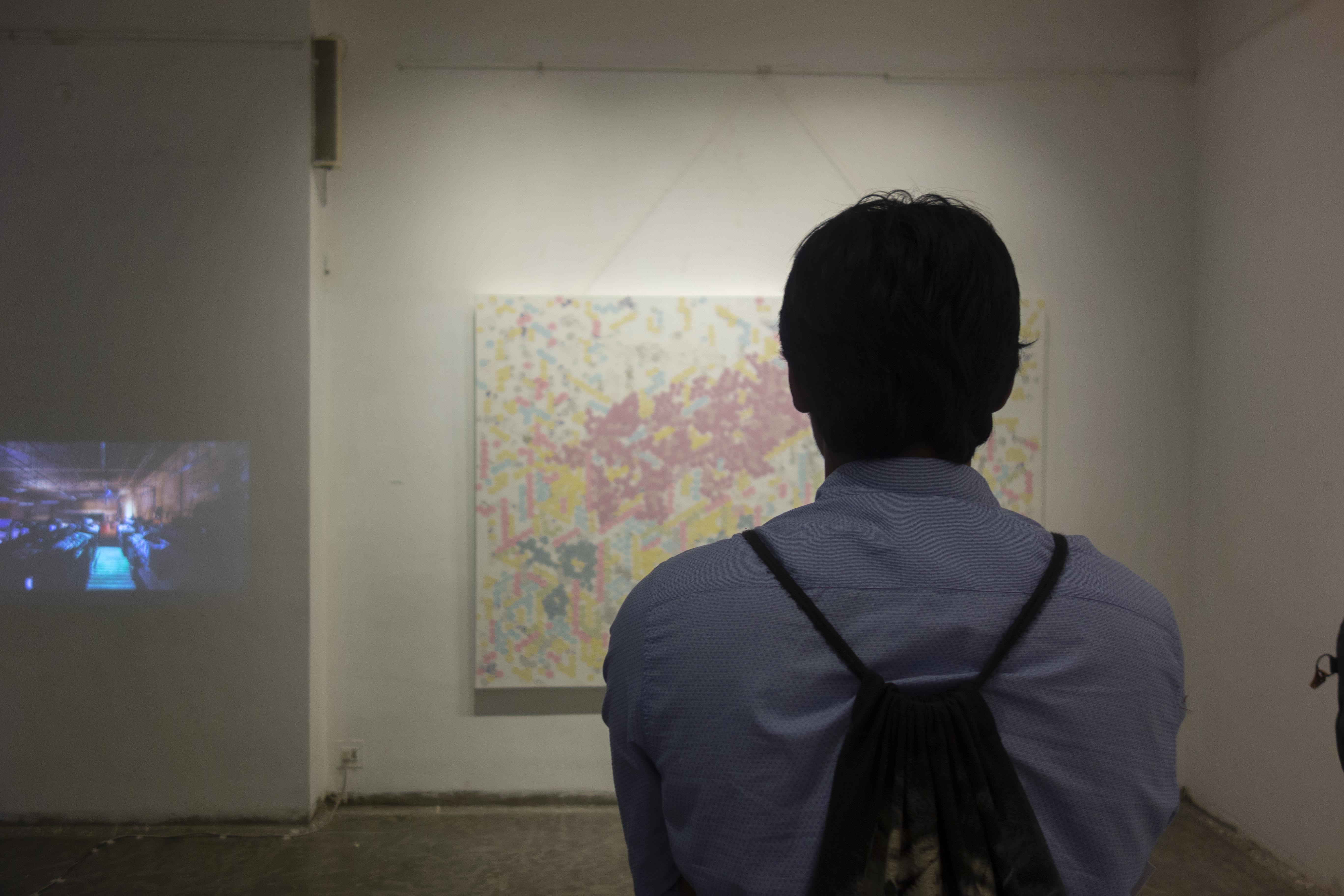 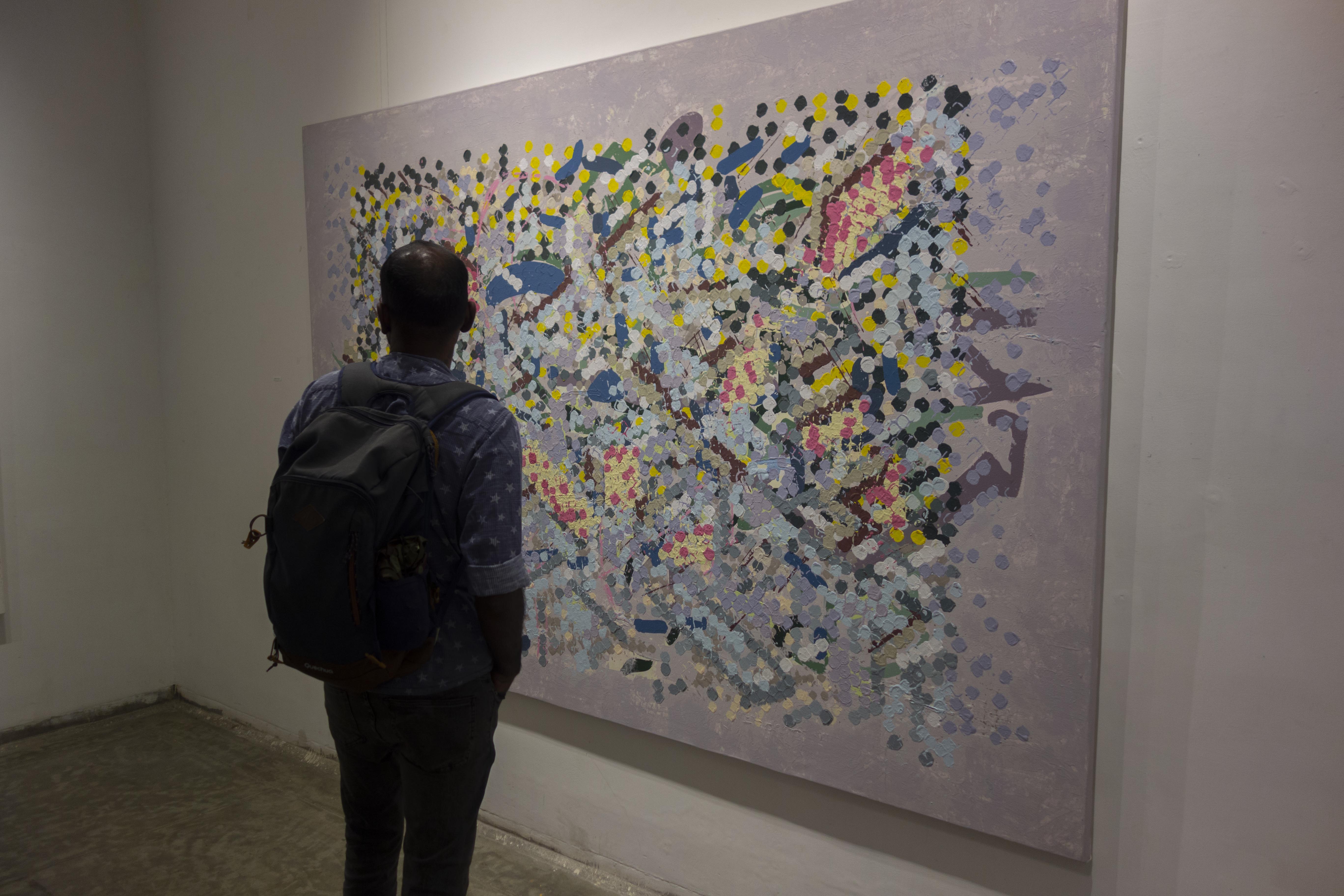 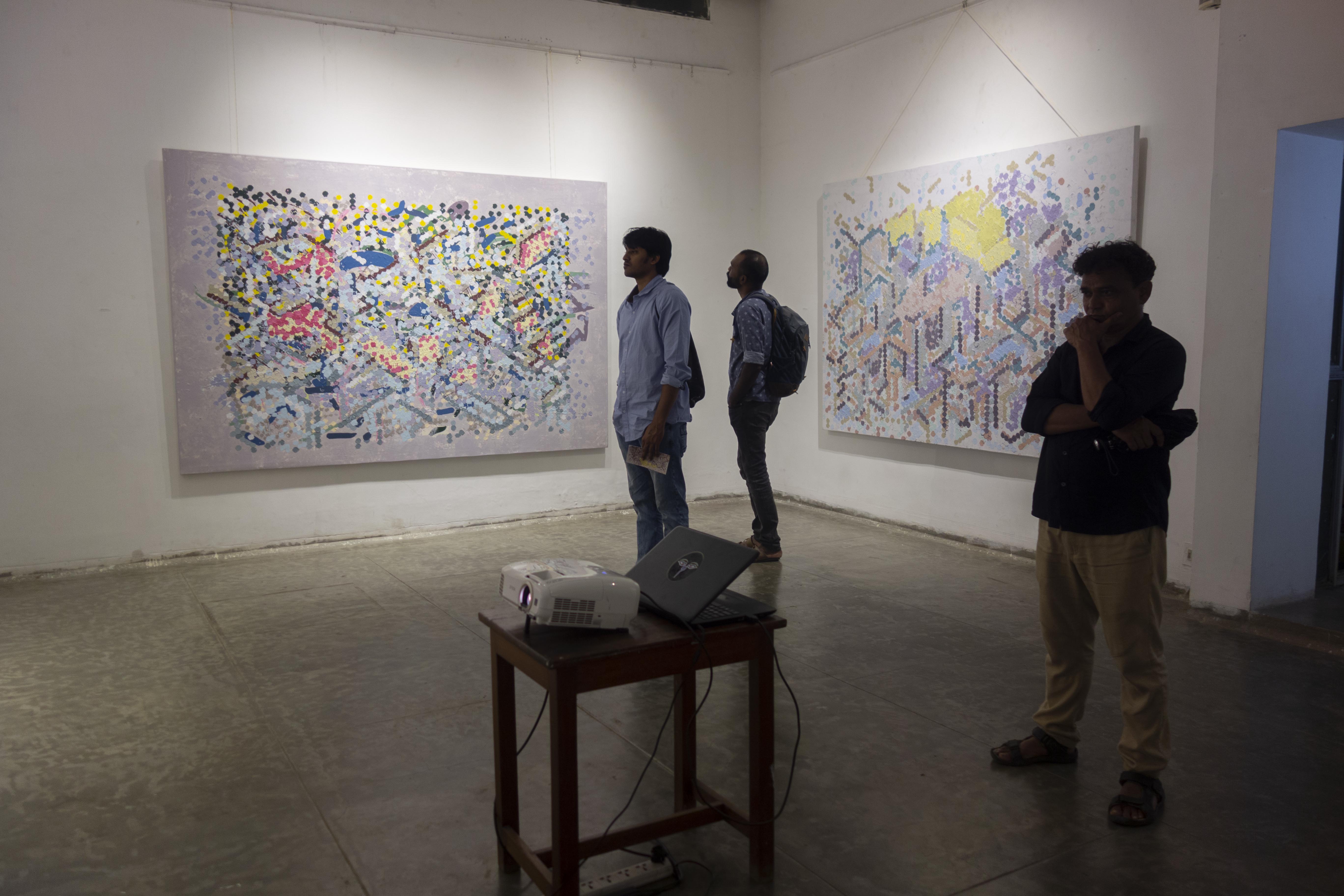 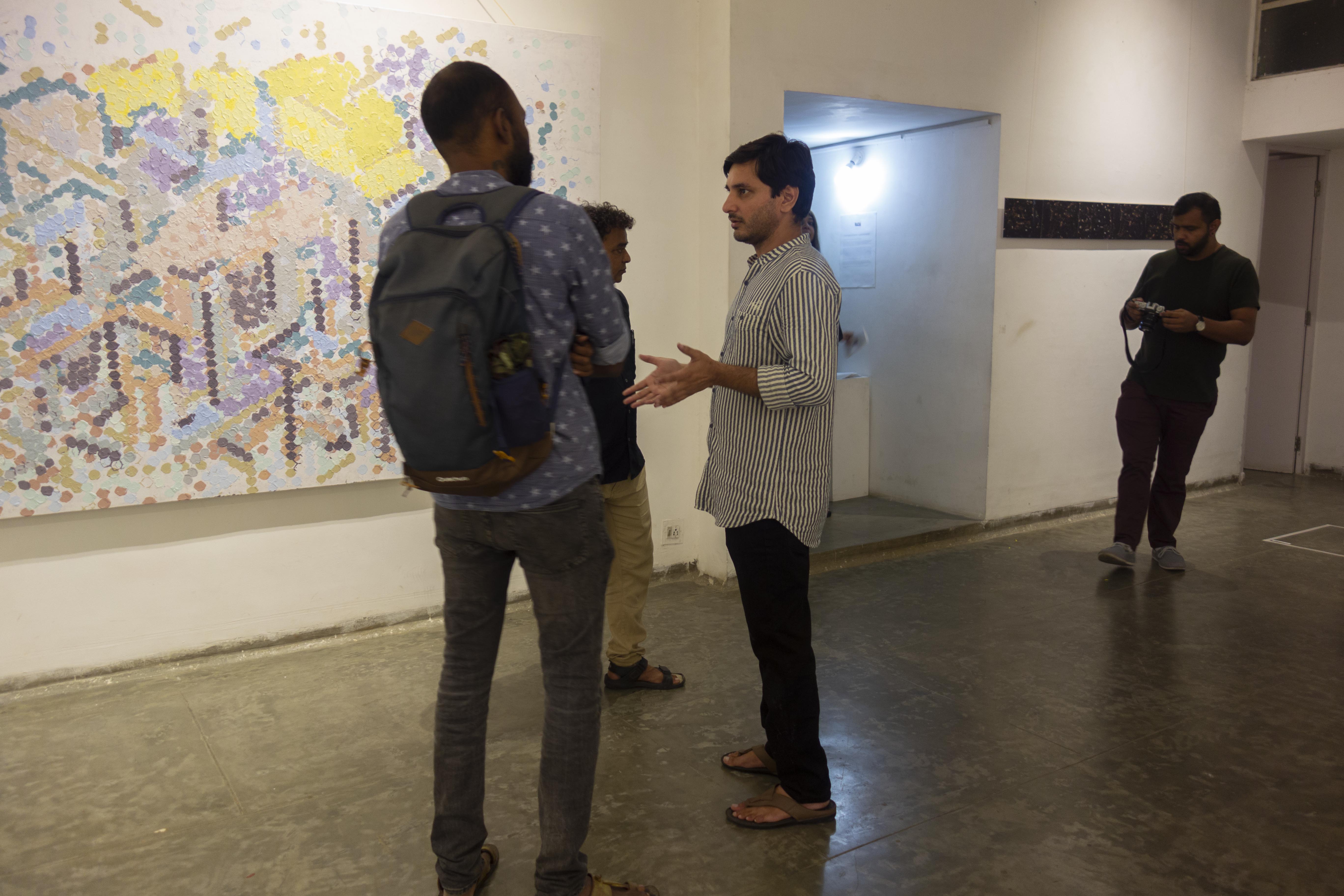 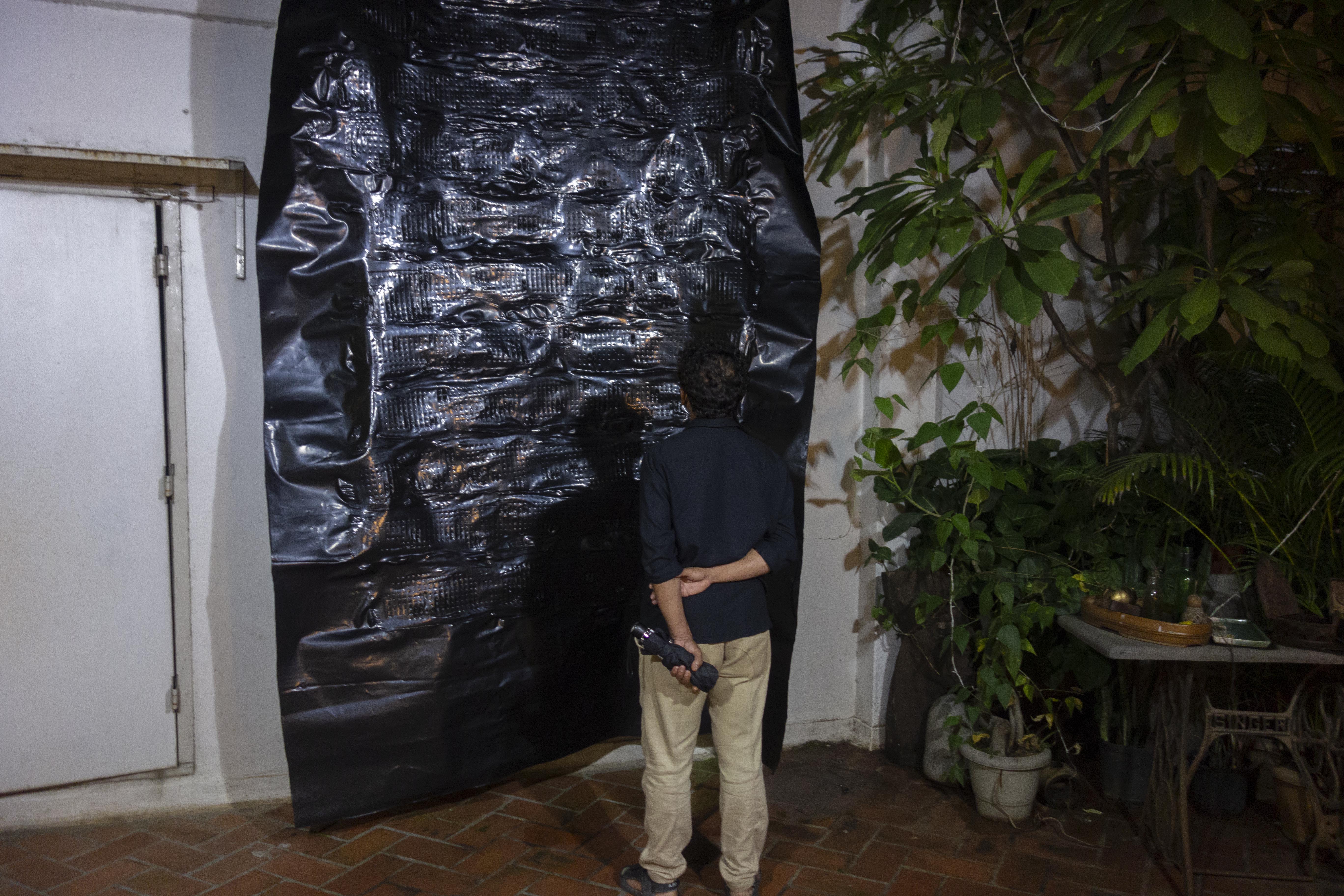 Dot-making for me takes on the function of ‘sensing’ art-making, where the work of art does not have a predetermined notion of expressing,  nor a pre-decided plan to execute. Dots force me to relate to a re-assembling of the world that is constituted as much by actions of dust particles in our environments the more apparent forces of nature and human actions. I believe our sensing of the world does not distinguish between the materiality of these forces,  and my paintings are an attempt to imprint and inscribe these forces on the two-dimensional planes of the canvas. The application of these dots and our reading them as the outer surface of a canvas holds together the surface, the material structures underneath, the moving particles that are physically around as well as in our sensory neurons, and all the actions that are both my own as well as of the environment in which the painting is made.

I try to build up spaces and structures that in some way enfold all of these elements, and the dots somewhere play a collective role of being gestures with meaning as well as vacant spaces waiting for objects to come. Rather than distinguishing objects from the spaces in which they exist, how do we start seeing objects as spaces, and furthermore, see spaces jostling with spaces? There is a chaos of things, which builds itself with the intimacy and urgency to share the feeling of unknowingness.

Dot-making for me takes on the function of ‘sensing’ art-making, where the work of art […]

Every day and The Contemporary

Dates:5th and 6th September 2019 Timing:10am-7pm Every day and The Contemporary is a culmination of […]