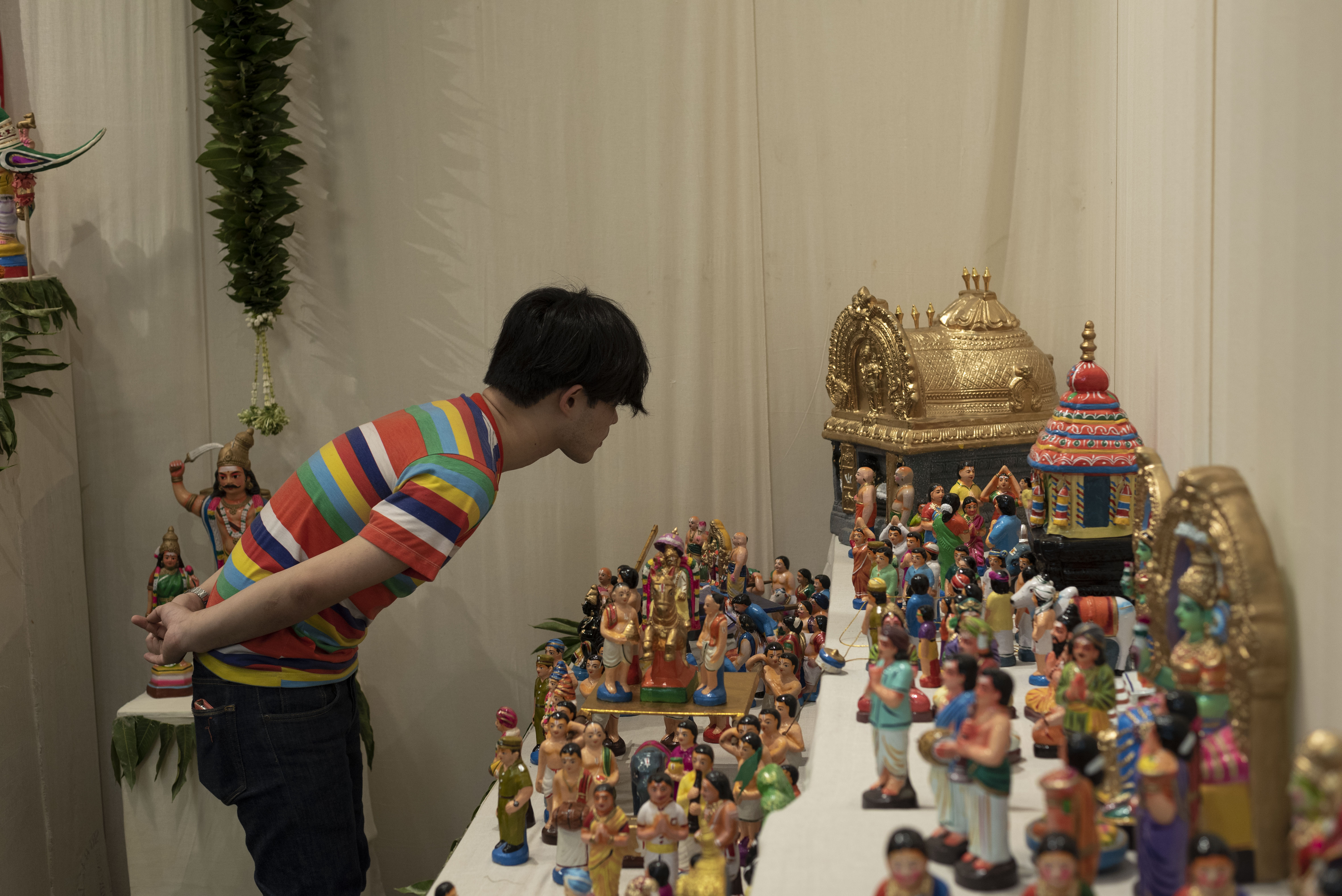 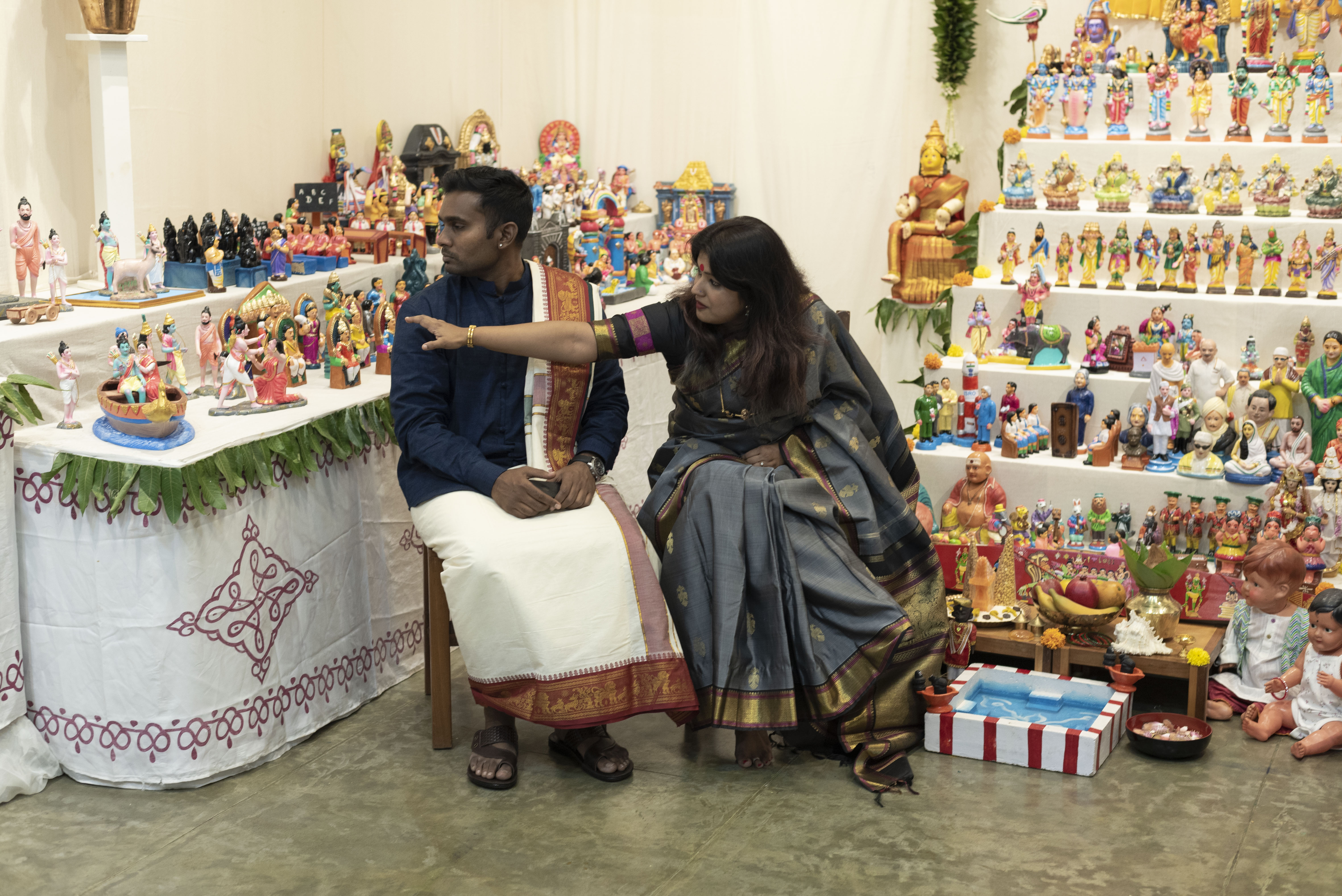 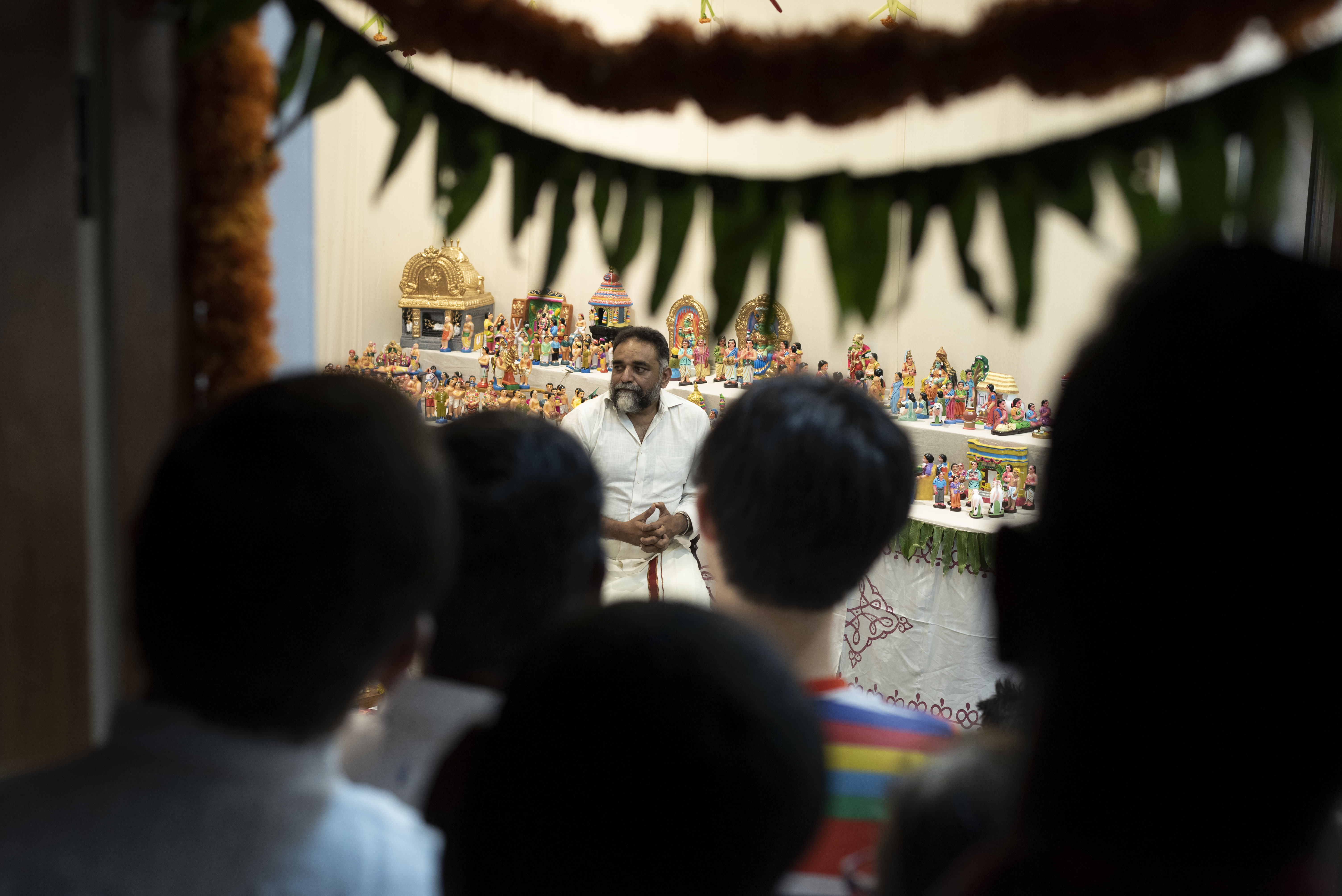 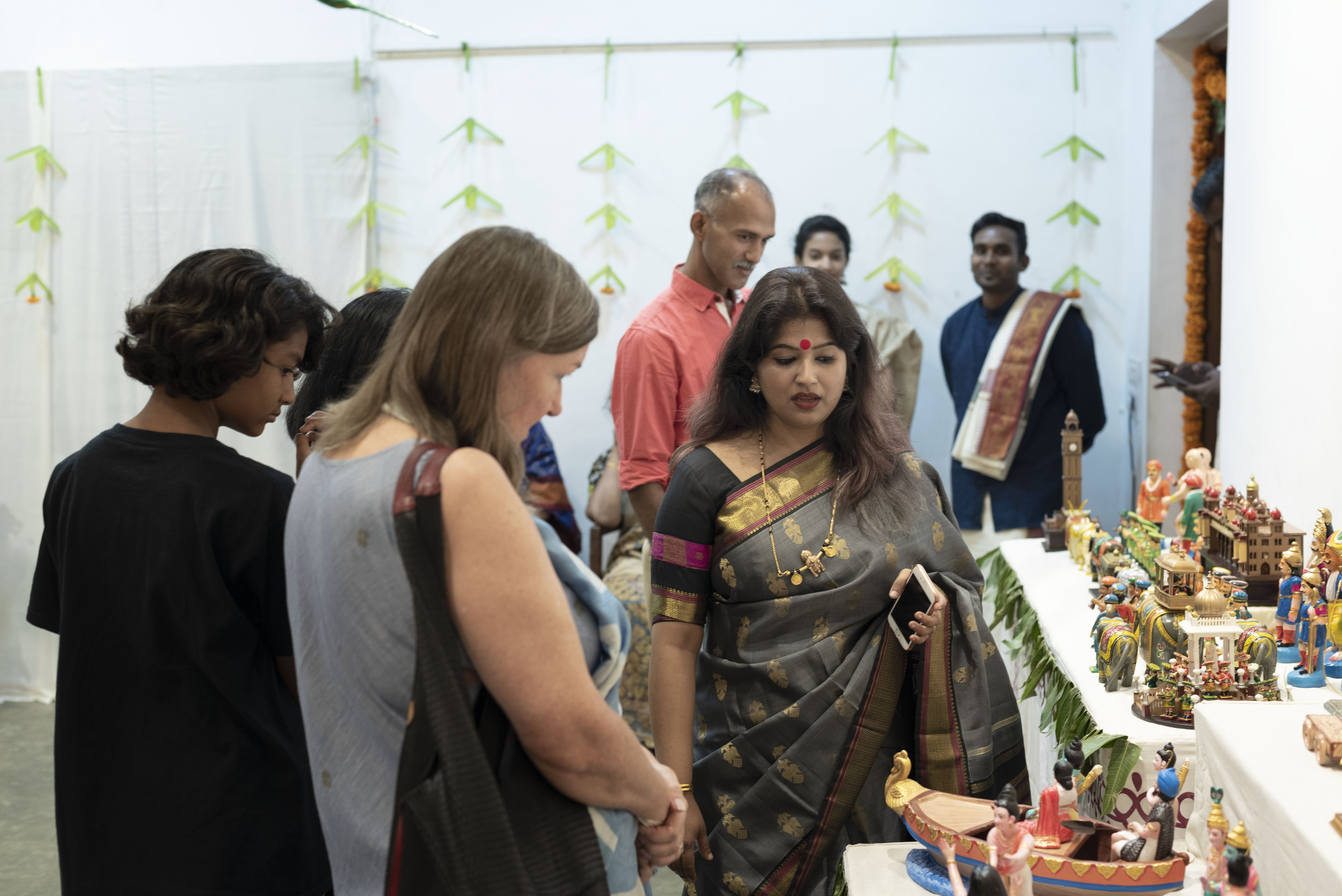 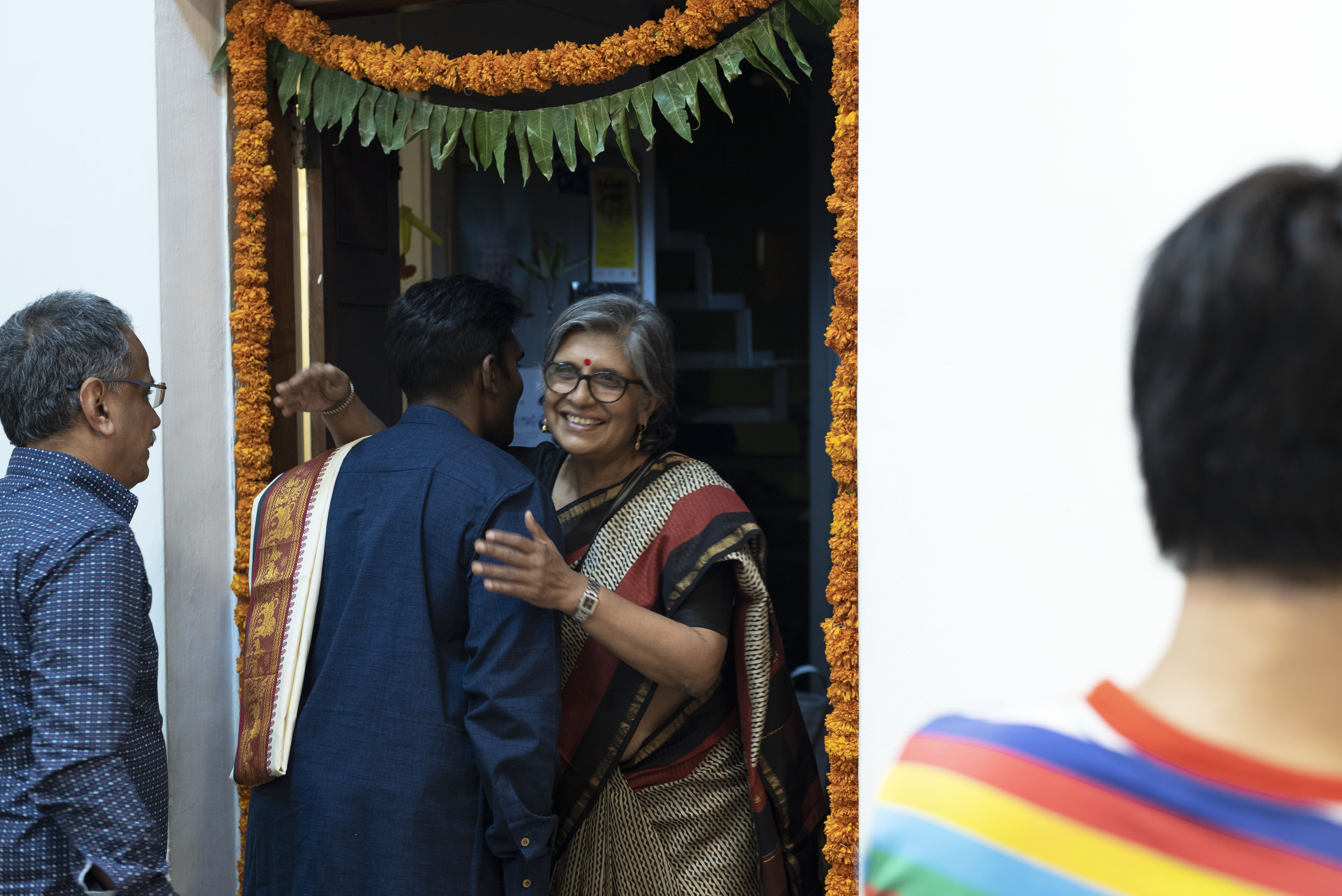 As antique and craft collectors, for both of us, our annual Dasara Doll Show is an occasion to share our collection and the stories of how these dolls came into our possession. A large part of the year is spent on sourcing dolls and sometimes even traveling to places such as Panruti, Nagercoil, and Madurai to meet artists and commission specific sets of dolls. The nine days of the Navratri or Dasara festival is a culmination of a whole year of planning and envisioning. Most importantly, it is a celebration of craft and the precious relationships we have formed with craftspeople along the way. That is where the idea to take Golu out of the home space and present it in a contemporary art gallery comes from. As a couple who ‘adopted’ this tradition a few years ago as neither of our families celebrates Golu at home, for both of us it is all about meaning-making within a new tradition rather than taking over the reigns from an elder family member and continuing an old tradition. We find ourselves more invested in the creative processes that are involved in the making of Golu dolls and the narratives that the dolls depict than the religious rituals surrounding Golu. The festive spirit, for both of us in our Golu journey, lies in being able to share with a wide audience the immense joy that we experience when we see stories in the form of dolls.

Dolls depicting former President Abdul Kalam addressing school children, a Thamizh medium Girls’ School set and the inclusion of policemen dolls who help monitor the chaos in a crowded Hindu temple festival among other evocative doll sets urge us to reflect on the contemporary concerns that the doll makers have expressed. Golu for us has a larger design than only being a popular annual cultural exercise. It is perhaps most importantly socio-cultural portraiture with immeasurable possibilities of embedded learning contained within its very form. We hope to bring our Golu festival closer to the art fraternity this year as our dolls fill-up the warm and welcoming 1Shanthiroad Studio/Gallery space and begin a conversation around the ethereal and amalgamate relationship that craft shares with art.

Originally from Bangalore, Rohini Sen and Eshwar Naidu are currently based in Trivandrum, Kerala where Eshwar is an engineer for a commercial airline. Eshwar has been passionate about collecting and restoring vintage and classic cars for a long time. He is a member of the Karnataka Vintage Car Club (KVCC) and has participated in several vintage car rallies.

Rohini is an artist and arts educator. She received her Bachelor’s degree in Visual Art from Chitrakala Parishath, Bangalore and later pursued a Masters’s degree in Arts Education from Rhode Island School of Design in the United States. Rohini has taught in the Srishti Institute of Art, Design, and Technology and a few international schools in India and the United States. She has been part of several group shows in India and abroad. Rohini has had two solo shows of her drawings (The Efficacy of Exquisite Pain, Gallery Five forty-Five, Bangalore 2014 & Drawing about Drawing, India International Centre, New Delhi 2016). Rohini is represented by Cade Tompkins Projects, Providence, Rhode Island.

Rohini and Eshwar got married in 2014 and began their married life in the temple city of Madurai where Eshwar was posted at the time. It was during their Madurai stint that they began their antique collection with a specific interest in vintage dolls, toys, and porcelain. Their collection soon expanded to include collectibles from their travels around the world. Rohini & Eshwar were contributing collectors to the show Tabiyat: Medicine and Healing in India curated by Ratan Vaswani at the Chhatrapati Shivaji Maharaj Vastu Sangrahalaya (CSMVS), Mumbai. Rohini has also used the collection to teach liberal arts courses on material culture and investigate how children play at Srishti’s Trivandrum chapter in 2016. For the last three years, Rohini & Eshwar have been hosting their Golu in their house as an open public event in Trivandrum. During Dasara, they have also conducted docent tours around their Dasara Doll Show and their antique collection for the Trivandrum Heritage Enthusiasts’ Group.